Clemson vs. Louisville is the Saturday night game and I want to take a look at the film of last year's epic battle and see what Clemson DC Brent Venables did to try to slow down Heisman Trophy winner Lamar Jackson and the explosive Louisville Offense.  Louisville scored 36 points with 295 yards passing and 273 yards rushing (573 total) and was a yard away on a 4th down inside the five-yard line from winning the game at the end.  There were a number of things that Venables and the Clemson Defense did well to pressure the Louisville offense into some mistakes and keep them off-balance.


The first pressure I will talk about are called Smokes in the TCU system, which is blitzing a Safety off the edge and slanting the Defensive Line.  Smokes were an effective pressure for Clemson.

The most frequently used pressure was Bullets, which is blitzing both Inside LBs.  Venables did an effective job of doing this from both even and odd fronts.  Louisville had a tough time picking up this Bullets variation, which Clemson calls Cross-Fire and resulted in the Will LB coming free: 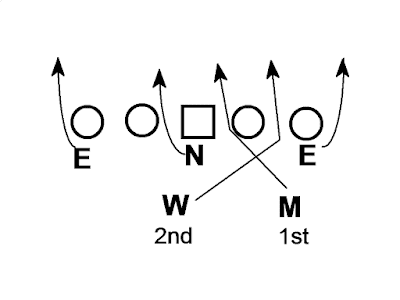 The most common coverage with blitzing six defenders is Man-Free with the outside rushers peeling off to cover the RB on a Swing route.  The DE in the first Bullets cut-up fails to Peel and it results in a big gain for Louisville.


A Double Smoke involves blitzing a Safety from each side and pinching the Defensive Line.  Clemson used this twice in the Red Zone with good results.


Lightning is a blitz bringing two men off of one side and slanting the Defensive Line away.  Louisville caught them with a Screen on the first cut-up and Lamar Jackson went Superman on the second cut-up.


I'm not sure what Brent Venables calls this one but he saved it for a critical situation at the very end of the game.  The DE on a long stick to the A gap, the Will LB blitzing outside the OT and the Weak Safety coming free.  Nasty.


With the success of the Clemson Defensive Line last week vs Auburn, I would expect them to utilize DL Stunts a little more than they did last year.  DL Stunts are "easy" pressure, only involving the DL and not requiring any additional help from the back end that could exploited by an experienced QB like Lamar Jackson.  The best DC at utilizing DL Stunts in my opinion is Don Brown at Michigan with Greg Matteson coaching the DL, and Venables is not too far behind.

More information on Gate and Nut can be found here and the Hi-Lo stunt here.  I love what Venables did on the Hi-Lo stunt which I have not seen before and will be copying soon.  The ball is on the right hash and the DE to the boundary rushed inside to the B gap, inviting Lamar Jackson to move that way in the pocket without much room to escape near the sideline.  The DE to the field took the long path past the OT and ended up where they planned for the QB to be in the pocket.  It resulted in a big sack at the end of the 1st Half.

I haven't had a chance to watch these teams this year to make any predictions for Saturday but I am looking forward to the game.  Louisville had success last year but the Clemson pressure definitely affected them and the game wasn't the Bobby Petrino masterpiece that we are accustomed to seeing.  I didn't see the great play-action game that I usually see, they should have ran more Power Read, and the OL did not stay on the double teams long enough up front.  They will have to make sure to block Clemson's big nasties on the DL to have any success on the ground and take care of the first level before worrying about the second level.  I also expect Louisville to run more Screens to combat Clemson's pressure package.

Also, thoughts and prayers to everyone affected by Hurricane Harvey and Hurricane Irma.
Posted by Coach Hoover at 7:48 AM