Take a look at my series on DL Stunts (Part 1 here) which continues with this huge play off a stunt that clinched the game in the Kansas City Chiefs 17-16 win over the Texans yesterday that I want to show.

If you just look at this stunt in a playbook, it is easy to dismiss, but once you see it on video, it really stands out.  The Colts were great at this stunt.  Dwight Freeney was famous for his spin move inside and he would line up at the Buck DE spot.  His job was to flush the QB outside the pocket, which he usually did with his spin move.  A right-handed QB trained by the Wave Drill will see the inside move by the DE to his left side and start moving to his left.  Then the Fox DE would speed rush upfield past the Offensive Tackle and come all the way back around to hit the unsuspecting QB.  For the Colts, it was Robert Mathis, who had a pretty spiffy night himself on Sunday, who would line up at the Fox DE and use his speed to hit the QB from behind. 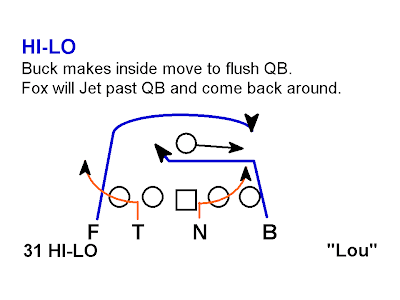 
Also want to share some great coaching advice here by Wade Phillips that he got from his father, the late Bum Phillips in this week's MMQB:


“He was the ultimate players’ coach,’’ Wade Phillips said of his father, Bum Phillips. “He had a real knack for making every player feel special, like they were so valuable. I never heard him once talk about winning. You play hard because your teammates are like a family. You owe that to your teammates. He always thought the scoreboard would take care of itself.’’ 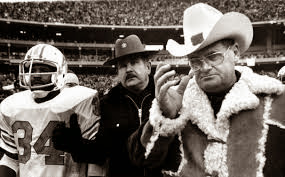