I posted a pic of my Defensive points leaders for last week and I got a question about how I did my points system.  I originally got this from when Charlie Strong was at Florida and I tweaked it a little.  I tweaked it some more after getting some feedback from Sam Nichols at X&O Labs as well, who made an excellent argument that Missed Interceptions should be even more penalized. 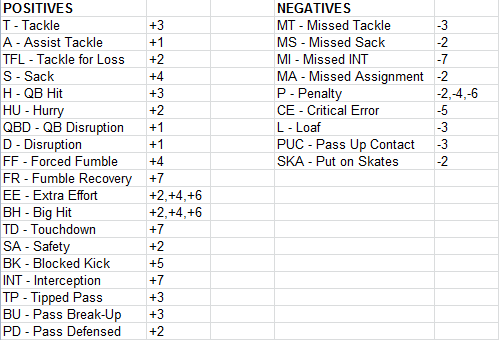 Here are the links for you to download to keep up with your stats:

What I do first is to tag the film on Hudl and O-D-K it and then export that into Excel and cut and paste the defensive play numbers into the Defensive Grade Sheet.  Then I go play by play and grade it.  Here is an example of our first two drives on Defense this past week, one good and one really, really ugly:

We had a 3 and Out on the Drive #1 which ended in a Fumble (which our back-up film guy missed).  I put the Drive # and Outcome in the first column.  "Fum" means Fumble and "Fum!" means we got a Tango (3 and Out).  A drive can end by Fum, Int, Punt, Downs, Half, and Game, and I put the exclamation point behind those to track my Tangos.  Anything close to 50% is great.

EXP-R means an explosive run (12+ yds) and EXP-P is an explosive pass (15+ yds).  Anytime we give up one of those, somebody is getting a CE, Critical Error.  If they get a big play and it is a TD, they will get a CE plus a MA (-2 pts) and possibly a Loaf or a PUC (Pass Up Contact).  You have to determine what are the non-negotiables for each position and count that as a CE.  If my Force player lets the ball outside of him, it is a CE.  When a DB does not stay on top of the WR and lets him get behind him, it is a CE, whether or not the ball is thrown his way.  If my DE runs straight upfield and they run underneath him or his OL kills a LB, it is a CE.  I also give a CE to my LB who does not make a "Pull!" call because it negatively affects the other LB being able to do his job.  Smaller errors are given a MA, Missed Assignment, instead of a CE.

Pursuit on Defense is a big priority, so I like to reward more than one player with an Assist if they are making contact with the ballcarrier as he goes down.  A Disruption when a player significantly affects and changes the direction of the ballcarrier.  I want all outside runs to have to cut it back inside when my Force player does his job correctly and I want all inside runs to bounce outside when my interior players correctly Spill the ball.  A QB Disruption is when a defender causes the QB to move in the pocket, which affects his accuracy.  QB Hits also affect accuracy, so they are rewarded as well.

I added PD, Passes Defensed, which is when a QB has an Incompletion due to good coverage.  Today I just changed MI, Missed Interceptions to -7 points.  If a DB makes a great break on the ball and drops the pick, you can still give him 3 points for a BU, Break-Up as well as the -7 for the MI.  You do feel a little bad for those guys sometimes because if they had good hands, they would be on Offense and you wouldn't have them at all.  SKA, Put on Skates, is when a defender is driven back very far and he is even blocking your own players.  As far as Loafs, I think Don Brown said it best when he said, “If you’re not running to the ball, you’re a traitor.  Might as well play for the other team.”

Once I finish my grade sheet, I print it out and begin to input the stats (much easier than flipping back and forth between two spreadsheets).  At the beginning of the season, I type in my defensive players in the names column.  Very important, if you add a name in Week 5, you must also be sure to add that name on the TOTALS sheet.  Note: Spring and Fall Jamboree stats do not count towards TOTALS.

All the columns with "0" on the bottom row will compute automatically and I will type in the blank columns manually.  This will also automatically compute the 3 & Out %, which is a very important stat for Defenses today.  The grey columns in the middle are the negative statisitics in which I like to have numbers that are less than 10.  Charlie Strong said they won like 95% of the time when they had 10 or less Missed Tackles while he was the Defensive Coordinator at Florida.

Thanks for all the great feedback so far.  If you have any questions, leave a comment here or hit me up on Twitter at @BarryHoover.
Posted by Coach Hoover at 11:41 AM