The Florida offense under Head Coach Steve Spurrier was undoubtedly one of the most exciting offenses in recent history, putting up lots of points and throwing the ball around as few teams had done up to that point in time.  Coach Spurrier's Fun and Gun attack helped to end the run-first era and to usher in the Spread offense era of multiple WRs and the ability to throw the football to win.  The remarkable thing about Spurrier and his offenses was how easy they made it look to score points and how wide open his receivers always seemed to be. 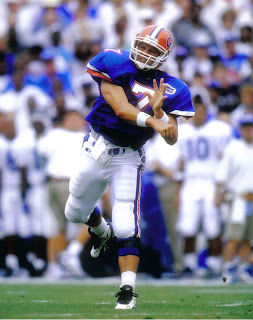 There were plenty of highlights in the Spurrier era during the 1990s.  The 1995 game vs. Tennessee with Peyton Manning at QB saw the Gators down 30-14.  Then there was a torrential downpour that was only exceeded by what Danny Wuerffel and the Gator offense did to pour on 48 straight points in a 62-37 beat down (also fueled by one of the biggest hits of all-time).  I'm not sure I can ever remember a team being up by so much like Tennessee was that ended up getting avalanched and absolutely destroyed the way they did.  The Gators pulverized FSU 52-20 for their first national championship in 1996 to get revenge for a 24-21 regular season defeat.  The upset of a great FSU team in 1997 that was ranked #1 in the country is still the greatest game ever played at Florida Field (my favorite game of all-time along with the 1985 Miami Dolphins 38-24 win over the Chicago Bears in the most-watched game ever on Monday Night Football to keep the Bears from going undefeated).

The other game that stood out for me for the raw fury of offensive explosion and opposing its will on a defense was Spurrier’s last game at Florida vs. Maryland in the 2002 Orange Bowl.  Rex Grossman did not start the game for missing curfew and Brock Berlin came and the Gators had a shaky 14-10 lead in the 2nd Qtr.  Spurrier, being a former Heisman winner, was ever the demanding perfectionist at coaching the QB position.  After Berlin threw his 2nd interception, Spurrier yanked him for Grossman, who came in and took over, obliterating Maryland’s 3 deep coverage for six straight TDs in a 56-23 rout.  If there was ever a clinic video made of how to destroy Cover 3 with the passing game, this game tape would have to be it.

I recently got a hold of some vintage cut-ups of all of the 1995-96 Florida TD passes.  The Gator offense under Heisman Trophy winning QB Danny Wuerffel, RB Fred Taylor, and WRs Reidel Anthony, Ike Hilliard, Jacquez Green, and Chris Doering led them to two appearances in the national championship game.  There were three concepts that the Gator offense was synonymous for that showed up repeatedly in the cut-ups that I want to show and talk about: the Fade route, the Corner route, and the Mills concept.

The Fade route in the Florida offense was a devastating weapon.  DBs could be in almost perfect coverage but the route always allowed the Florida WRs plenty of grass to run to and the ability to see the ball and to jump and grab it before the DB could turn around and react quick enough.  I got coached up recently on the Fade route by former Gator great, Jacquez Green.  He explained it simply as a foot fire, hard stick inside, and run to the back corner of the end zone.  Green was only 5-9, but ran the route better than anyone else at Florida because his feet were so quick.  He was great at the foot fire and the deadly jab step inside to free him from tight man coverage.

Football is certainly a science with all of the X's and O's and fundamental techniques that we coaches can spend a lifetime studying and tweaking, but it is also an art form.  I believe that the Fade route, especially in slow-motion, is quite possibly the most beautiful play in all of football.  I tried to slow-motion the film in the cut-ups but the video is too old to do so. 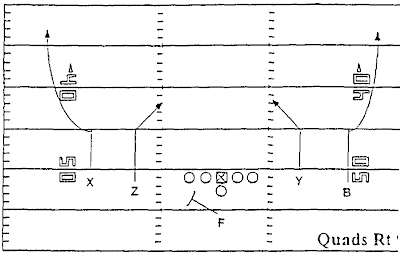 Florida saw a lot of Cover 2 and they used the Corner route to score numerous TDs back in the day.  Spurrier liked to get to the opponent's 30-40 yard line and throw TDs from there rather than drive down deep in the red zone and let the field compress him and limit what he could do.  There were multiple concepts that utilized the Corner route in Spurrier's offense.  Corkers is basically the Smash concept mirrored to both sides.  Righty/Lefty was Smash to the playside with a Post from the backside.  Ralph/Lonnie was a concept made famous by Spurrier in which the #1 WR's rule was to run a Curl route and to adjust that route to an inside release Corner route vs. Cover 2.  Chris Brown at Smart Football and Grantland says Ralph/Lonnie allowed Spurrier’s offense and his QB to always be right: “You play him in Cover 2, he throws the corner, you play him in Cover 3, he throws the curl.   Finally, in the cut-ups they also hit the Corner route once out of the Snag concept (#1 – Snag, #2 – Corner, #3 – Flat or Swing) that is quite popular today. 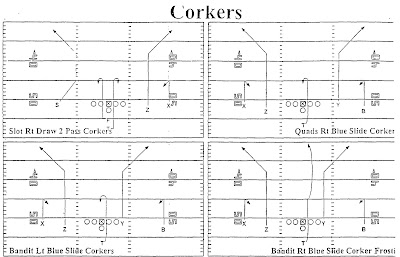 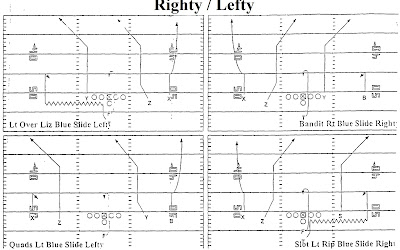 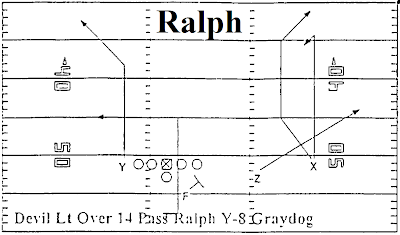 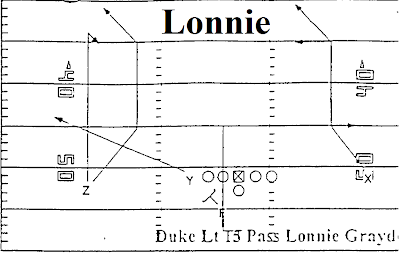 
Mills was a Play-Action concept named after former Florida WR, Ernie Mills, and was responsible for many big TD passes during the 1990s.  Spurrier’s first SEC victory in 1990 vs. Alabama was one of the biggest wins in school history according to Spurrier and was made possible by a 70 yard pass to Ernie Mills on this very play.  This play is great vs. Quarters coverage that is prevalent today.  The #2 WR runs a Dig route to get the Safety to jump him and the #1 WR runs a Post route over top of the Safety.  The QB will read the Safety to see if he will come up to play the Dig or stay back to play the Post.  The single side WR to the opposite side runs an inside release Corner to occupy the backside Safety. 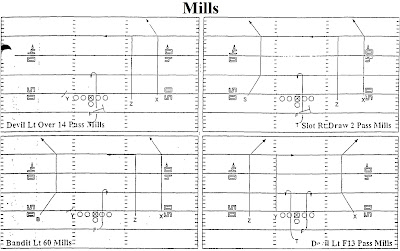 Coach Vint with The Little Things are the Biggest Things and Leverage, Numbers, and Green Grass.

Blitzology is back again with Torch: Lighting Up the Offense with the Read Twist and Equipment Review.

Coach CP at Strong Football with 3 Reasons to Use the TE at the H.S. Level, Cover 2 Trap Zone Blitz, the Smash Concept, and Beating Press Coverage with Bunch Formations and Motion.

Coach Mac with Practicing Your Tempo and Power.

DaCoachMo at Spread Football features Dub Maddox in Question: Want to Be a Great Coach? and he also shares Clinic Notes.

Compete In All Things with Shallow Cross: Why Is He Always Open?

Coach Holst with notes on the Nevada Spring Game.

Chris Brown at Smart Football and Grantland with What Drafting Matt Barkley Means for Chip Kelly's Plans for the Eagles.

Duece has some motivation material with Today's the Big Day and talks coverage with Split Field Coverage - The Underneath Players.

Dan Gonzalez with Assembling a Game Plan: Parts One, Two, and Three.

Coach B Dud with Installing R4 For the First Time, Using an H Back to Enhance Your Inside Zone Package, Game Planning, and R4 in Spring Ball.