The Stalk & Go RPO (Run-Pass Option) is a good addition to any playbook against defenses that become undisciplined with their Defensive Backs versus the run.  The play below is Zone Read with the QB reading the DE.  The H-Back arcs around the DE to the CB but he fakes a block on the CB and sneaks behind the CB.  Most Quarters defenses will check to Cover 2 vs a Nub set to the Boundary with no Wide Receiver and this is the case here.  The CB is the Force player and he must come up quick to play the run.  The Safety is not a regular Cover 2 hash Safety, he is cheated to a C-7 (C gap, 7 yards deep) alignment to help versus the run.  However, he is still a Pass-first player, but he is in a difficult position to cover the H-Back with full run action. 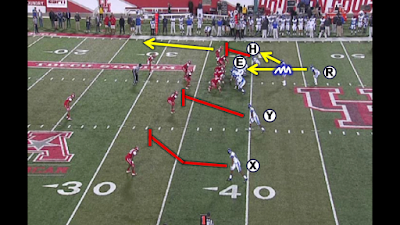 The second cut-up shows a Quarters CB who comes off to play versus the run.  It is important for DBs to know if they are a Pass-first or Run-first player in every single coverage and that they remain disciplined because this RPO will exploit it.  A Pass-first player cannot play the run until the ball crosses the line of scrimmage, but it is easy for players to get greedy at times.

Auburn also did this to Alabama a few years ago as well here as featured by Chris Brown at Smart Football.

I added a video to the Stick-Draw post my buddy did back in 2012 here.

Email ThisBlogThis!Share to TwitterShare to FacebookShare to Pinterest
Labels: RPO