My guest writer has contributed another piece:

Since Coach Hoover is too busy to make updates, I thought I would contribute another piece.

I can’t take credit for its invention, but I can take credit for being smart enough to steal other people’s great ideas. I want to share with you some of my thoughts on combination plays- that is, plays that combine multiple concepts into a single play. For example, you could have a run with a quick screen, a quick screen with a slow screen, a drop-back pass with a slow screen, a quick pass with a draw, and so on. The possibilities are endless. I believe that this is the next hot thing in offensive football. A few years ago, you could line up in 4-wide and that itself was revolutionary (at least where I was coaching). Then you had the read-option incorporated into the spread, and that was the cool thing to do. Next it was fast tempo. Now, teams like West Virginia are leading the way into the next craze, which is combining different plays into a single play-call that greatly increases a coach’s chance of being “right.” I have been and still like the idea of lining up and scanning the defense before making a play-call, but sometimes alignment doesn’t tell the whole story. Coaches have long been using post-snap reads to isolate single defenders (or multiple defenders) for option plays or pass patterns. Now, a troublesome defender can be isolated, and his post-snap action will tell the QB what to do. The following example is something I saw Dana Holgorsen talk about a few years ago when he was at Oklahoma State. It combines a basic Stick concept out of a 3 x 1 formation with a draw play to the RB. 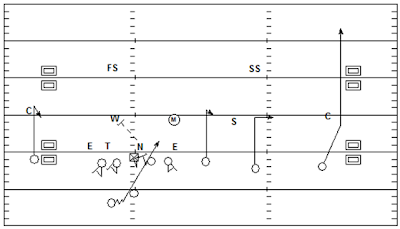 Above we see a Stick-Draw combination. A pre-snap look shows a 6-man box and a 2-safety shell. For the Draw, we have 5 blockers for 6 defenders. For the Stick, the offense should be able to win, but an athletic MLB who matches #3 hard could take him away, leaving the Sam to match #2. The vertical to the wide-side is a tough throw for most high school quarterbacks, especially when there is nothing to hold the safety inside. By themselves, the Stick or Draw may fail, but combined, are nearly unstoppable.

QB catches the snap, takes a 1-step drop and looks to throw the Stick to #3. If he is open, QB throws it when he sees eye contact. If the Mike expands to #3, QB turns and hands off to the RB, who has shuffled and delayed for a good one-one-thousand count.

Another version I like is a similar play, but a 2-back Lead-Draw version. Here, we are working off the Sam. I tell the QB we favor the Lead-Draw, but will throw it if Sam plays tight to the box. 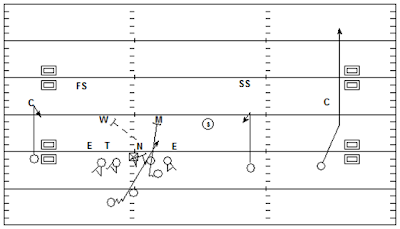 QB catches the snap and looks to #2 on the Stick (I give my Stick runner freedom to get open, so if he is unmatched he can turn inside). If the Sam widens to take the Stick away, QB turns and hands off to the RB. If the Sam sits, QB will throw to the Stick route when he gets eye contact. The other benefit I like about this play is the delayed block on the MLB. My Fullbacks have a tough time blocking the Mike on isolation plays, but when the LB gets a high-hat read and plays soft, we have a much better chance of blocking him. In addition, the DE pass-rushes and widens the hole, which makes it easy on my PST.

These are just two examples of how you can take two different plays and put them together to give you something that gives your offense a great chance to win on any given down. For me, the key is figuring out which defender is giving you trouble, and coming up with a way to put him in conflict.

If you have any questions, post them in the comments section. Thanks for reading and I hope you enjoyed it!