The RB Blaster and Sideline Drill both work Ball Security, which should always be the primary focus of the RB Coach. The Blaster Drill can be done with players on each side punching at the ball if you don’t have a Blaster machine. You can also incorporate this into your ladder drills with players on both sides trying to strip the ball out. 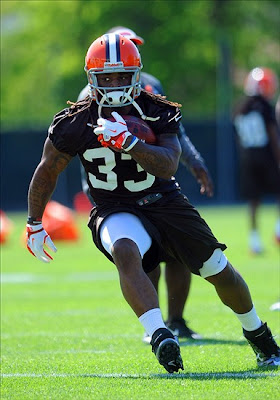 In case your guys don't know who Tiki Barber is, Trent Richardson has
excellent Ball Security fundamentals for younger players to emulate.

The Sideline drill is great in that it works both Ball Security and balance as a RB tries to stay inbounds while being shoved wide by bag holders. Another thing you can do with the Sideline Drill to make it harder for the RB to stay inbounds is to start him on the #’s or more toward the #’s so he approaches the sideline at an angle with his momentum already working towards the sideline.

I finally got a language translate button that works! It is on the left side of the page. Try it out.
Posted by Coach Hoover at 4:00 AM