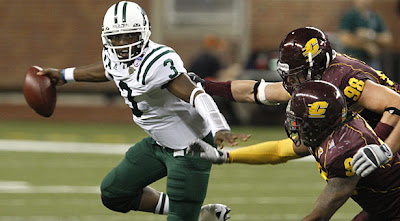 Pursuit is a critical element of effective defensive play and it can be an eraser for missed tackles vs. superior skill players.  Deuce recently wrote a piece on Pursuit here that is essential reading, especially regarding holding kids accountable on film.  The first chapter of Ron Vanderlin's excellent book, Football's Eagle and Stack Defenses, is entirely devoted to the fundamental skill of defensive pursuit.  He defines pursuit as "an intense, all-out effort that is driven by an insatiable desire to get to the football and to put the ballcarrier on the ground," and says that it is "the essence of a good defensive football team."

Since relentless pursuit is not an innate characteristic, it is easy for football players to decide that they are not needed on a play and to loaf.  Vanderlin reasons then that "you need to emphasize pursuit as a key to your defensive philosophy" in order to properly train this "swarm mentality" into your defenders.  He also says that pursuit and proper angles needs to be coached on every play of practice. 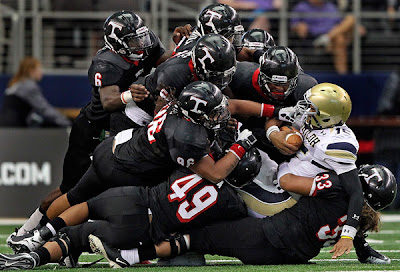 A defense that emphasizes pursuit will take tremendous pride in their effort of all 11 men swarming to the football and will want to hold each another accountable for their effort.  Pursuit will help create an aggressive attitude that demoralizes opposing ballcarriers as they are being chased with nowhere to run and buried on every play by five or six defenders.  This pride, accountability, and aggressiveness leads to a confidence that all great defenses have. 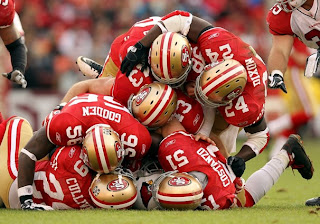 Fritz Shurmur said in Coaching Team Defense that, "Preventing the big play in the running game involves getting great pursuit to the football followed by good tackling when the defense gets there;" and in the passing game, "Each defensive player must be constantly reminded of the importance of breaking or running to the football when it is thrown." 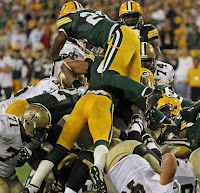 Pursuit drills are not just for getting kids to take correct angles and run full speed, they are also good for other important defensive fundamentals.  Coaches can use pursuit drills for formation recognition, making correct strength calls, and getting players lined up correctly.  Players must work communication during Pursuit Screen and Pursuit Oskie drills; yelling "Pass" as the QB begins his drop back, "Ball" as the ball leaves the QB's hand, and "Oskie" when the Interception is made.  Vanderlinden stresses the coaching points of not blocking below the waist, never blocking behind the football, ball security, running to and staying along the nearest sideline after the Interception, and having the other defenders escort the interceptor to the end zone.

Proper tackling technique is something that always needs to be prioritized, and is done by getting players to break down into a form tackling position as they approach the ballcarrier and then having them tag the ballcarrier with two hands below the waist.  It is important to make sure that defenders are not slowing the ballcarrier down as they tag him or it will defeat the purpose of the drill.  Great pursuit lets you "make your own luck" when it comes to turnovers, since defenses with great pursuit will get more loose balls by having more players near the football. 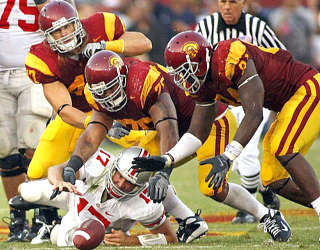 Force play is another important fundamental that must be emphasized during Pursuit drills. Different coverages may be used to change up who the Force player is for each drill rep. The Force defender will keep his outside arm free and squeeze the ball inside to his Fill players by attacking upfield as close to a 45 degree angle as possible.  Fill players will attack the ball inside-out on the ballcarrier's inside hip and expect the ball to cut back to them.  You could also run a reverse off of the Pursuit Sweep Drill to keep your Contain player honest.  Support players must be ready to replace the Force player if he is cracked or loses outside leverage.  Backside Support players will be the deep cutoff players and their hustle can be the difference in giving up six points.


I have a great example of the value of pursuit from the 2011 season.  Virginia was down 10-7 at FSU with 9:24 left in the 3rd quarter.  FSU WR Bert Reed caught a pass over the middle and turned on the jets for what looked to be a backbreaking TD in this defensive battle. CB Chase Minnifield desperately sprinted (from the top of the video screen) and hawked Reed down at the 1-yard line after a 68-yard gain.  The Virginia defense managed to hold FSU to a FG and one player's relentless pursuit ended up being the difference in a remarkable 14-13 win for the Cavaliers. 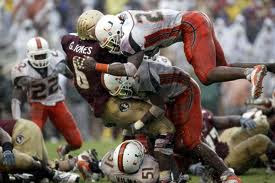 Here are pursuit drills with game footage from the "U" to help reinforce to your players why pursuit is important.  Randy Shannon's defenses were outstanding from 2001-2006, being ranked in the top 7 nationally every year but one, and were known for their speed and relentless pursuit.