I've been meaning to do an article to explain this particular Fire Zone, but I will let Georgia DC Todd Grantham do it for me. He broke this blitz down on ESPN.com, and I have some good Steelers cut-ups to help illustrate the concept. 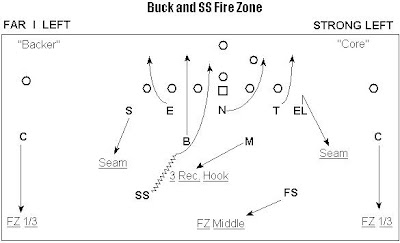 Grantham likes it as an inside pressure to get to the QB, but Dick LeBeau of the Steelers used it more often (at least in 2004) on run downs as a way to sneak in Troy Polamalu as an unblocked extra defender to stuff the inside run game.  Either way, versus the pass or run, it's an effective pressure because it's tough for the OL to pick up the SS coming from depth.

Also, here is a link to Dick LeBeau's 2002 Cincinnati Bengal defensive playbook.  The Buck and SS Fire Zone actually is not in there, but you can download the picture at the top of the page.
Posted by Coach Hoover at 3:00 AM