Levels is one of the very best pass plays to attack the Cover 2 pass defense.  Smash (Hitch by the #1 outside WR and Corner by #2) is most people's weapon of choice vs. Cover 2, but Levels has a shorter and easier throw than Smash and the Dig route to the field has better leverage on the hash safety than a Corner route does.  Safety Leverage is one of the most underrated aspects of the passing game IMO.  Also, on Levels your QB is reading the OLB vs. Smash where he is reading the CB, who is generally the defense's quickest and best pass defender.  Smash can be dangerous vs. a CB who is good enough to play both the Hitch and the Corner route.


The Cover 2 defense was built upon taking away the shorter throws with its five underneath pass defenders.  Bill Walsh said that Cover 2 was his chief opponent and what he spent most of his time trying to combat.  There were teams who liked to use the passing game as a means of ball-control who found it difficult to stay on schedule (check out Dubber's posts here and here) by having to attack the deep seams of Cover 2 with lower percentage throws.  I believe Levels is a higher percentage play vs. Cover 2 than Smash, making it well-suited for teams that want to control the ball with the forward pass.  I like both plays and I don't think you need to get rid of Smash, but I like Levels just a bit better.

I like to call the Levels concept Indy for a couple of reasons.  First, is that the play was popularized by the Indianapolis Colts.  Second, the concept consists of both WRs running "In" routes.  The Colts are running Levels (cover 2 beater) to the left and Houston (cover 3 and 4 beater) to the right.  The Z WR for the Colts runs a Go route, but this is supposed to be a 16 yard Curl.

I said that Levels was not good to the Boundary, but the Colts are running it to the Boundary, so what gives?  First, the TE as the #2 receiver is further inside than a WR would be.  Second, the Titans' Safety is wide, so the TE has sufficient leverage on his Dig route.  Third, remember that the pro hashmarks are much more narrow than college and high school levels, so they are not as limited in the passing game with Field and Boundary concepts.

The Titans are actually playing Tampa 2, where the MLB is dropping back to deep middle 1/3 and both Safeties are outside deep 1/3.  This could explain the extra width of the Safeties pre-snap.  I really like the route by the Y WR.  He takes an outside Fade release to 5 yards and then works back inside on the 5 yard In route.  This helps to get more horizontal spacing between him and the TE on the Dig route.  If the Dig and In routes are right on top of one another, the OLB can cover both.  Horizontal spacing is just as important on this play as it is on Curl-Flat.  One defender being able to cover two is never a good thing for the passing game.

I'm going to take some time off for summer vacation, but try out Levels this summer in your 7 on 7's and let me know how you like it vs. Cover 2. 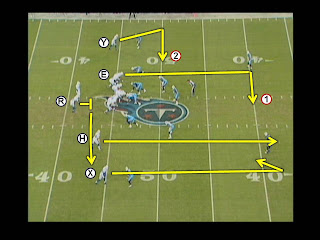 Here is the film:


Levels from Barry Hoover on Vimeo.

Links
Chris at Smart Football with the Constraint Theory of Offense and Pass Pro.

Coach CP at Strong Football with I Formation vs. the 4-2-5.

Brophy on the quick passing game with Why Quick?.

Dacoachmo at Spread Football talks about no-huddle and Going Fast.

Deuce at Football is Life with the 4-3 Scream and Splatter Defense (I originally thought this was a make-believe defense like the Face-Melter).