This Dick LeBeau Zone Blitz has already been talked about on Blitzology's Blog here and on Smartfootball.com here.  I liked it so much that I started digging through my video library of blitzes to find a cut-up of it.  It has 5 blitzers to attack vs. the middle 3 of the OL.  I  especially like that the blitz makes it possible to avoid the offense's two best pass protectors, the OTs.

The picture below is a page from Dick LeBeau's playbook when he was the Head Coach for the Bengals:
2002 Cincinnati Bengals 3-4 Defense - Dick LeBeau.pdf

The Nickel will align to the passing strength and he will be the #2 Seam dropper.  Most people utilize their #2 dropper as the SCIF (Seam-Curl-Flat) dropper.  LeBeau uses a different technique for his #2 dropper, which he refers to as the Seam dropper.  The Seam dropper will have outside leverage (instead of inside leverage for SCIF technique) and he will collision and carry #2 vertical until #3 goes to the flat.  For more info on the Seam Drop, check out Blitzology's posts: Seam Drop and SCIF vs. Seam.

Both DEs know they will be dropping on this play.  The Nickel will alert the DE to his side with a "Hook" call to let him know that he will be the #3 Hook dropper.  The DE away from the Nickel will be the #2 Seam dropper to his side.  The DE's rule is that he is the Seam dropper unless he hears a "Hook" call from the Nickel.  The DEs can take a step upfield to fake a pass rush to hold the OTs and keep them from blocking the DTs.  Teams also like to have personnel packages with OLB-types at DE to utilize more speed rushing the passer and for better pass coverage in Zone Blitzes like this one.


I am disappointed that I can't (yet) find any Steeler cut-ups of this concept, because none of the cut-ups below show the DTs executing the Jet B Gap technique as described in LeBeau's playbook.  The advantage to the technique taught by LeBeau is that the DTs can ideally avoid the OTs altogether in getting to their Contain rush.

The cut-ups I have found so far show the DTs working outside of the OTs.  The problem with this is that the OT can pick up the DT, which allows the Guard to work inside and pick up one of the blitzers.


For this to be a true 5 on 3 overload inside, the DTs must avoid the OTs.  They have to jet outside past the Guards and get behind the OTs to get to their Contain rush position.  Dallas Cowboys DL Coach Brian Baker talks about this in the 2010 Atlanta Glazier Clinic notes, starting on p. 19.  He says to rush lanes, not gaps.  The two Contain rushers' responsibility is to stay outside the QB, not the OT.  His rush track is to an aiming point of 4 yards behind the outside leg of the OT.  He wants to work to the upfield shoulder of the QB (the shoulder farthest from the LOS, but not getting all the way behind the QB like Bill Belichick warns about in these notes here).

The blitzing Safety must be aligned to the same side as the Backer.  The Dime will line up as a LB to the opposite side of the Backer and blitzing Safety.  The Backer will cross first, the Dime comes right behind him and crosses second, and the Safety comes third, right off the Dime's butt.  The Safety has to hit it fast to get there from distance.
I would communicate this blitz with the call, "Wide Bench Triple Inside 3 Blaze."  Our "Wide" front has two 3 techs.  The "Bench" call has the DT, Fox DE, Will LB, and FS to the Boundary and the NT, DE, Dime, and SS to the Field.  This call will always get the FS lined up to the same side as the Will LB and allow him to blitz quickly from the near hash.  The Nickel's alignment will be independent of the Bench/Field call and he will instead line up to passing strength.

Here's how it would look when run from the hash and here are the videos: 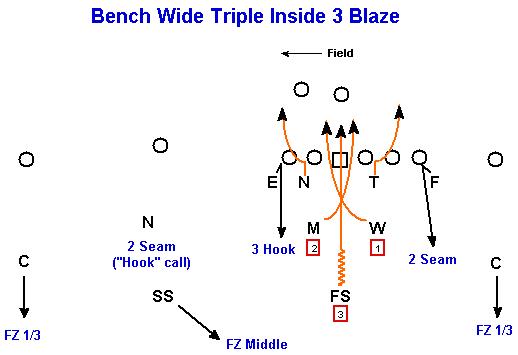 Field Triple Inside 3 Blaze from Barry Hoover on Vimeo.

Wide Triple Inside 3 Blaze (Florida) from Barry Hoover on Vimeo.

Thanks to Brad who found this cut-up.  Notice the aggressiveness of the Safety, Laron Landry, in contrast to the Virginia Tech Safety in the previous cut-up.  The Safety has to hit it full speed and know that the opening will be there between the crossing LB and Dime Back.