Double Slant is a great quick-game concept vs. Cover 2 or any type of Man coverage.  The key is the route by the inside WR.  He doesn't just run upfield and then slant inside.  He has a very specific aiming point at the inside # of the #2 defender.  I chose the video at the end of the article as a teaching cut because it demonstrates this technique extremely well.  Success in the passing game is not about drawing up cool-looking plays—like everything else in football, its success is mostly due to fundamentals and proper technique...by the the receivers, the QB, and especially the protection.

The concept in the video has Slant-Flat to one side (1 High beater) and Double Slant to the other side (2 High and Man beater).  The QB will choose to go to either side based on the number of  Safeties and if he has Man coverage.  He has two Safeties deep (2 High) in the pre-snap picture below, so he is thinking Double Slant.  The QB will stay to that side unless there is immediate post-snap Safety rotation, which would change the coverage shell from a 2 High look to a 1 High look.

"Cadence is the wave of the future," is something I learned from current Temple OC Scott Loeffler at the 2009 Florida Clinic.  Proper film study of the opponent's blitzes and Safety alignments and movements as well as the use of quick counts and dummy counts in passing situations can get the defense to tip their hand to what they are doing. 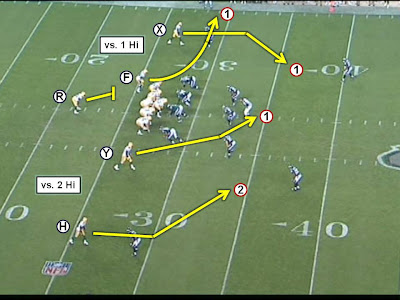 The QB can read this as a progression from inside-out vs. Cover 2 or he can be taught to read the #2 defender and throw opposite of his movement.  In the pre-snap picture above, the OLB  who is the #2 defender only widens out to an apex position half-way between the Y WR and the OT.  The Packers probably knew they would get this look and game-planned Y to tighten his alignment and take a 1/2 - 2 split (2 yards inside of half-way between the outside WR and the OT).

Y knows he will probably not be getting the ball vs. this look;  however, his route is crucial in making this play work vs. Cover 2.  He will open up a huge window for the QB to throw the outside Slant by running his route with an aiming point at the inside # of the OLB (see pictures above and below).  It is absolutely essential in the passing game for each WR to run his route correctly to get the exact spacing needed between WRs and to properly manipulate pass defenders. 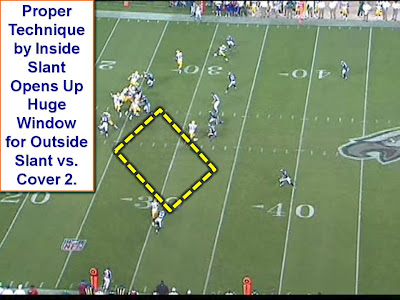 If the OLB does widen his alignment all the way out to Y (see picture below), then Y will have a very good chance of getting the ball since he will have more room to work inside.  If the #2 defender widens to cover the outside Slant, then the inside WR will be open and he will NOT want to come inside too much towards the danger player, who is the Mike LB.  It is important that he "gets skinny" on his route once he slants inside to stay away from the Mike LB.

Note: the Slant route shown by Y below is not "skinny," but Mike Leach had his Y take a wide split to allow him to run the route like this.  Also, there is a Cover 2 beater to the opposite side, so Mike can't help out on both sides.  As a general rule, the inside WR wants to runs a  "skinny" Slant instead of a regular 45 degree angle Slant to stay away from the Mike LB. 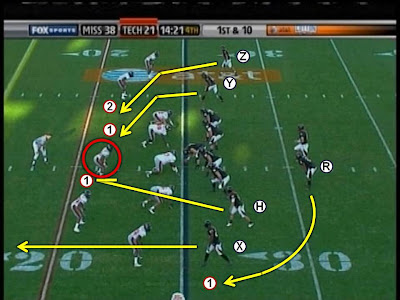 Both pictures show the inside WR on the ball and the outside WR off the ball.  Teams will also have the outside WR run a deeper Slant than the inside WR.  Both of these coaching points improve the effectiveness of the play by creating better separation and spacing between the WRs.

Versus Man, the QB will read the Double Slant concept from inside-out.  The inside WR must have a quicker release vs. Man coverage than the outside WR.  I have taught my inside WRs to use a quick foot-fire or a one-step diamond release and then Slant inside.  The outside WR must be coached up to be patient on his route and take his time to execute a three-step diamond release (throw by and rip past the CB and then Slant back inside).  It is important that the inside WR's route gets open first since he will be the QB's first read vs. Man.  I'll talk more the outside WR's technique on the Slant route vs. Zone and the diamond release vs. Man in another post.

The protection is half-man, half-slide (go to the bottom of this article for more info) and it held up fine.  The throw by Brett Favre is perfect: 12 inches in front of the chest like Bill Walsh used to teach it, and placed low to protect the WR vs. the incoming Safety.  The Safety is the hard-hitting Brian Dawkins, who is a bit too nosy for my liking.  I would be thinking about running Sluggo (Slant and Go) soon to try to take advantage of his aggressiveness in breaking up on the Slant route.

Good article about the Slant route to the single WR side:
http://livingforwinning.blogspot.com/2011/01/accessing-great-quick-passing-game.html
Posted by Coach Hoover at 6:42 PM