The diagram below shows the Fox DE initially obeying his Block-Down-Step-Down rules vs. the OT.  If he follows his hands, his technique will take him right into the pulling Guard.  How he attacks the Guard is the key to stopping the Counter play.  If he literally obeys his Wrong-Arm rule and attacks the inside shoulder of the pulling Guard with his outside shoulder, he will be pinned easily and the pulling Tackle will not miss a beat coming around for the LB.  The defense has forced the ball to bounce outside, but nothing is being disrupted.  It is important to remember that maximum disruption is the goal and purpose of Wrong-Arming. 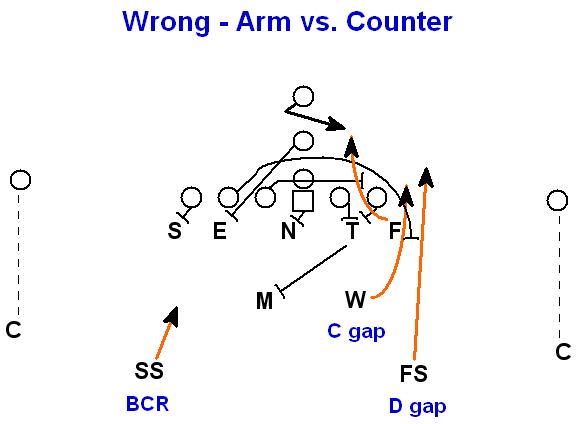 We want the DE to not just Wrong-Arm the pulling G, but we want him to work upfield right through the pulling G.  We want him to cause maximum disruption and knock the pulling G into the pulling T and have them both pushed back into the RB.  That is the ideal train wreck scenario, but what is important is that the DE is able to knock the pulling G back into the pulling T's path to disrupt the timing of the play.
The DE needs to know that he will not always be able to Wrong-Arm vs. the Counter.  If the pulling G is very tight to the LOS, then the DE will not be able to get much power by coming underneath him.  He will be pinned easily if the pulling G is too tight to the LOS.  If the goal is maximum disruption, then the DE needs to just "blow up" the G as hard and fast as he can and let the LB fit off of him.  The DE may not make the ball bounce outside, but he can box the play in and still disrupt the play by causing the OT to cut up quicker than he wants to.
The DE needs to be taught:
1.  To Wrong-Arm and work upfield right through the pulling G if can.
2.  If he can't Wrong-Arm the pulling G without being easily pinned, then blow him up with as much force as possible.
Either way, the DE must act with violence, cause maximum disruption, and create a train wreck.
The video does a great job of showing how to Wrong-Arm vs. Power.  The DE/OLB will attack the inside shoulder of the FB with his outside shoulder in order to cause maximum disruption and cause a train wreck. The first cut-up in the video of Bill Romanowski was provided by OJW, who also talks about the Wrong-Arming technique in his outstanding 4-3 vs. the Flexbone - DT Play and the 4-3 vs. the Flexbone - DE Play articles.

Wrong-Arm from Barry Hoover on Vimeo.


RUNCODHIT is beginning a new series on stopping the Power running game with the 4-2-5: http://runcodhit.blogspot.com/2011/03/stopping-power-running-offense-with-4-2.html
Posted by Coach Hoover at 12:40 PM