The topic of the origin of the Power Read play came up recently and I will investigate the beginnings of this play that has become a powerful weapon in the Spread Offense this past decade.  Brandon Lechtenberg was a recent guest on USA Football's podcast, Deep Dive on Defense with Chris Vasseur (if you haven't checked this out yet, you are really missing out with my man Coach Vass killing it).  Coach Lech told the story of how his brother, Adam Lechtenberg, was the first one to suggest the idea to run Power Read while he was a G.A. at TCU in 2009.  TCU unveiled the play in a stunning win vs. Clemson early in the 2009 season.  QB Andy Dalton was the leading rusher for TCU in that game with 19 carries for 86 yards and he had a lot of key 3rd Down conversions with the Power Read play.   TCU also featured this play in their epic Rose Bowl win over Wisconsin that year.

Chris Brown at Smart Football noticed this new phenomenon right away and wrote this excellent work on TCU's Inverted Veer Option detailing the Inverted Veer or Power Read play that TCU shocked Clemson with.  Chris Brown and Matthew Brophy at Cripes! Get Back to Fundamentals have always been the godfathers of the football blogs, largely because they were so sharp at detecting new trends in the game of football and they could explain things so well.  Chris re-visited the play not too long ago here with The Evolution of the Power Read Play...and of Alabama and Clemson's Newest Wrinkle, the "Toss Read."

From Andy Dalton to Cam Newton to RG3 to Lamar Jackson, Power Read has been the bread-and-butter running play for three Heisman winners and in a short period of time it has played a key role in helping to shape recent college football history:

Chris noted on Twitter that we are nearing the 10-year anniversary of the play but I mentioned that I saw someone run this play earlier.  The first time I remembered seeing this play ran was with Texas A&M vs. Cal in the Holiday Bowl on December 28, 2006.  I realized this play was unique and I posted on Coach Huey about it and asked if anybody else had seen it and knew anything about it.

I used to record a lot of TV games on VCR and study the game that way because coaching film was scarce back then.  I remember being at my Dad's house and kicking myself for not having recorded it after seeing that one play.  The recent podcast and Twitter discussion led me to go back and see the play again after 12 years, but I was not able to find the All-22 film for that game.  However, I did find the game on YouTube, and I finally found the play I was looking for:

Only it wasn't the play I was looking for.  This play wasn't Power Read!  It was Q Zone Bash, with Bash meaning "backside sweep" for the RB.  Well, I felt pretty dumb for being wrong about the play—there wasn't even a pulling Guard for it to be confused with Power up front.  TCU must have been the first come up with the play in 2009.

Then, laying in bed later that night it hit me...

The first time this play was brought into existence wasn't by TCU, it was by me!  (Not a "I am the greatest football coach of all-time!" exclamation mark, but a "NO WAY!" exclamation mark)  On accident!  By mistake!

This is the origin of the Power Read play on January 8, 2007, two years before it was ever run in Division 1 college football: 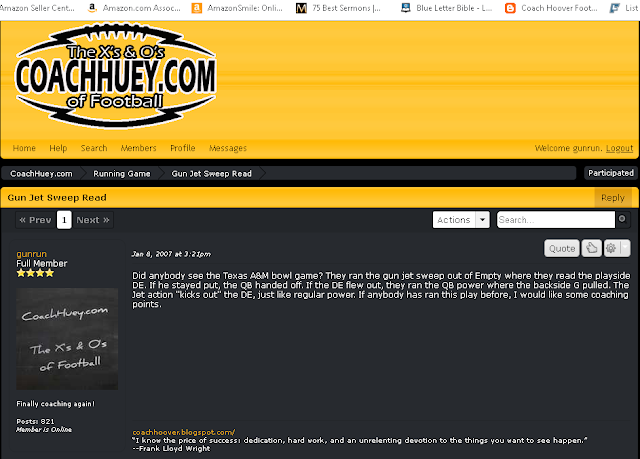 The play looked just like QB Power, which had me thinking that was the concept they ran up front, only there was nobody kicking out the DE.  The QB read the DE on the Q Zone Bash just like Cam Newton and Lamar Jackson read it today on Power Read.  He even rode the mesh for a step before pulling it and hitting it frontside and downhill.

While this play by Texas A&M in 2006 wasn't Power Read, it did serve as the inspiration for the play.

I have recently added a number of new files to my Google Drive as well as some new Folders:  Film (2018) and Twitter cut-ups.  I will upload some new game film every couple of weeks and the new twitter folder has lots of great videos I downloaded from @CoachDanCasey, @JamesLight, @CoachAdamGaylor, @FB_FilmAnalysis, and many others.  There are a lot of great ideas here that are on the cutting edge of the game of football.  I am most likely taking the year off of coaching, so I hope to be able to post more often here in the near future.  My next post will be a big project which I have been meaning to do for quite some time.  It will define and help explain the different possible read tags in the Shotgun Running Game: Read, Bash, Toss, and others.  After that, it will be a whole lot of Defense and Sim Pressures.  Also, this is my 100th post, woo hoo!