The success of the NCAA Blitz, a.k.a. America's Fire Zone, like any other Blitz or Fire Zone, is predicated not so much on the schematics of the play as much as it is on the fundamental techniques executed by each player.  I have talked about the "Run to Daylight" technique of the playside DE (F in the diagram below) here in a previous post.  Manny Diaz refers to this Fire Zone as Scrape, and I will talk about the "Scrape" technique of the Mike LB that is essential to the success of this play. 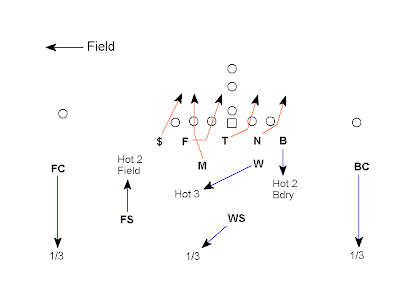 I believe it is better to master the fundamentals of a few pressure concepts than it is to be one of those "Dial-A-Blitz" defensive coordinators with 8,000 blitzes—all ran poorly.  Poorly executed blitzes can create an extra gap in your front that can cost you big chunks of yardage as you will soon see.

The diagrams and the video below will do a much better job of showing the right and wrong way of executing the Scrape technique than I can explain.  Basically, the Mike LB must scrape tight off the butt of the playside DE for this concept to work.  If he does not, a crease will open up for the RB to gash the defense.  The diagrams below are from the first cut-up in the video. Also, good job by the offensive guys of using the FB motion to help widen the Mike LB just enough to help keep him from properly executing his technique. 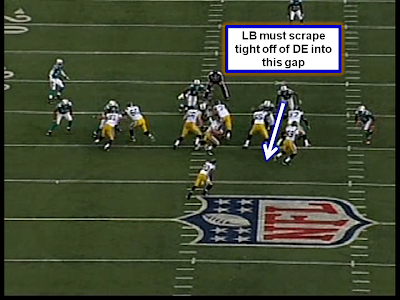 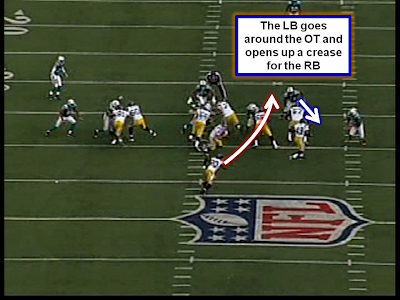 The team that looked consistently great running this stunt on film was the Green Bay Packers. Here is the break-down of the three good cut-ups at the end of the video:

Cut-up 1 - LB scraped tight off the DE's butt and was able to efficiently turn the corner and tackle the Back on run away from him.
Cut-up 2 - Tight scrape helps to stuff the play for little or no yardage with nowhere for the RB to go.
Cut-up 3 - Good scrape causes the RB to bounce outside to the unblocked Safety and the backside LB, who does a good job of reading his Guard pulling and works over the top to the first open gap that he sees.

Here is the video:


Also, this Scrape technique is not just for this Fire Zone, it is a fundamental skill used often by LBs.  The first TD in the Panthers-Saints game this past weekend was a good example.  The Panthers ran Power and the backside LB failed to scrape tight enough when trying to run the crease over top of the double team (go here to 0:28 mark).