H Option is a play designed to get the ball into the hands of the offense's most dynamic playmaker.  First it was Paris Warren at Utah, and then at Florida it was Percy Harvin, after whom the position was commonly referred to as the "Percy Position."  It is the football equivalent to the basketball play where everybody spreads the court and gets out of the way to let your best player take his guy 1 on 1.

First, let's look at an Empty formation commonly employed by Utah and Florida.

This Empty formation causes some stress for defenses.  The RB (R) split out wide causes DCs to make an important choice: do they waste a CB covering him out wide, causing a mismatch with a LB covering the H WR, or do they put the LB out wide covering the RB (which is a mismatch in itself, as well as leaving the defense vulnerable to the run with the LB out of the box area)?  Meyer's last game at Utah was vs. Pittsburgh in the 2005 Fiesta Bowl and Paris Warren was isolated on LB Clint Session and they dialed up H Option repeatedly to take advantage of that mismatch.  Session is an athletic LB, but the mismatch was based not as much on speed as it was on quickness.

The beauty of Option route passes is that you can run them repeatedly without losing effectiveness (as illustrated by this game and the BYU vs. Michigan 1983 Holiday Bowl where Norm Chow ran 69 H Option like 17 times to take advantage of a RB-LB mismatch).  Warren ended the night with 15 catches for 198 yards and 2 TDs for the night, most of those on H Option.
The H position is a combination WR/RB player.  Percy Harvin, from 2006-2008, was the team's most explosive WR as well as the team's best rusher.  Florida liked to start in Empty and then motion Harvin back into the backfield.  This is pretty common practice now in the Spread-happy world that Meyer and Mullen helped to create, but it was very difficult for defenses to adjust to when they first starting doing it at Bowling Green and Utah.  Even though Harvin was the team's most effective runner, he was not someone you wanted carrying the ball 20+ times a game because of his size and his value in the offense, so they tried not to overwork him during the grind of the SEC regular season.  He left Florida averaging an incredible 9.55 yards per carry!

H Option depends on finding the right guy at the H position, someone who can play ball in the playground and simply get open.  Paris Warren and Percy Harvin were fast, but more importantly they were quick and could accelerate out of their cuts.  Meyer said Harvin had the best acceleration and quickest first step of any player he had ever seen.  There might not be another explosive and versatile athlete like Percy Harvin for quite some time, but it is not impossible to find someone quick enough to run H Option.  Someone like Wes Welker would run it great, although he wouldn't be much of a threat motioning into the backfield and running the ball.

Here's how the play is drawn up with the Hot route adjustments for H and Y drawn in bold: 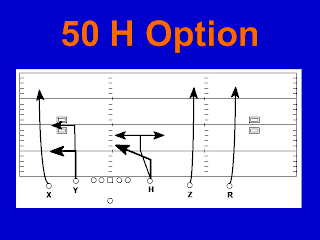 The coaching points for H on the frontside Option route is to run at the nearest defender inside, push to 8 yards and attack his inside leverage.  Ideally, H would like to get inside of the defender and then beat him inside (shortest throw, easiest throw).  The first cut-up at the end of the article will show Harvin in the first cut-up get leverage on the defender, give a QUICK outside move, and win inside.  If the defender wants to keep inside leverage, H will push him inside and then break out.  If their are two defenders bracketing H, he will simply hook up between them.  The frontside Option route has freedom to work all the way to the backside OT.

Mullen said they were very precise with their Spread offense, but not with this play.  He says you don't want to over-coach the Option route.  Tell H that if the defender matches you, win inside.  If he stays inside, work out.

The backside Option route will be run by the inside WR to a depth of 10 yards.  He will run at the nearest defender inside and either hook up or break out.  He cannot work inside past the near OT or he will interfere with the frontside Option route.  His thinking is to win outside.

The other WRs are running Go routes to blow the top off the defense and make room for the Option routes. I have seen Florida do some other things on film to better occupy the Flat defender.  One is the have frontside #1 (R) run a 5 yard Hitch.  This is also a good outlet vs. a 3 Deep Fire Zone. The other thing I saw them do was to have frontside #2 run a 10 yard Out.

The QB will look at his movement key, which is the Mike LB and work opposite.  His progression is frontside Option route to backside Option route.  If there are no Free Safeties deep, they are expecting pressure and will make a "No Deep" call.  The frontside WR's "Hot" route will be a quick Slant ("Lookie") and the backside WR's "Hot" route will be a 5 yard Speed Out.  As a general rule, you want one in-breaking and one out-breaking "Hot" route.  The QB's footwork is a 3 step and Hitch from the Gun.

I have always liked H Option but have never had the chance to run it myself.  I have always wondered how good of a play it is without having a Percy Harvin running the Option route.  The reason I say that is that I don't see this play on film much from anybody else.  If you have any feedback and experience, feel free to comment.  I believe this play is worth having if you run a significant amount of Empty, and it nicely sets up the Follow concept that I will look at in my next post on the Meyer/Mullen Spread Offense.


For more info on the Meyer/Mullen running game and philosophy of their Spread Offense go here to Creating DE Conflict.
Posted by Coach Hoover at 5:44 PM