The Follow concept is one of the primary passing concepts of the Urban Meyer and Dan Mullen Florida Spread Offense (the others being H Option, Follow Pivot, Houston, and Bullets).  It is primarily ran out of Empty and it is an easy play for the QB in the Spread Offense to execute.

Below are diagrams of the "Dig" concepts used by Meyer and Mullen at Florida: 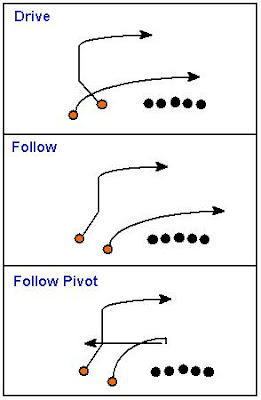 Follow is a play designed to complement H Option.  Versus zone, the H WR will run at the first defender inside of him just as he does on H Option.  His job is to get the attention of that defender as the Follow (Dig) route and the Shallow route attack his zone from the backside.  The QB will look at H initially too, which helps the play to look like H Option.  The Shallow is the Hot route and the Follow route will break off at 8 yards vs. a "No Deep" look (no safeties deep).  The Z WR will also run a protection route right at the next defender inside to keep him off of the Shallow route if you watch the cut-ups closely. 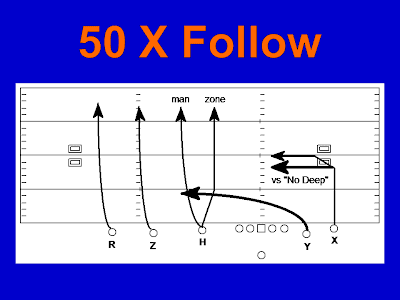 The QB will take a 3 step drop from the Gun and his first progression is to look at H on the Vertical Access route, who is a viable option to split the safeties vs. any 2 Hi look.  The QB's eyes will then go to the Shallow to the Follow (Dig) route.  The QB's movement key is the first LB inside of H to the next LB over Y.  Versus man coverage, the QB will also have a lot of room to run to the Follow side if nobody is open. 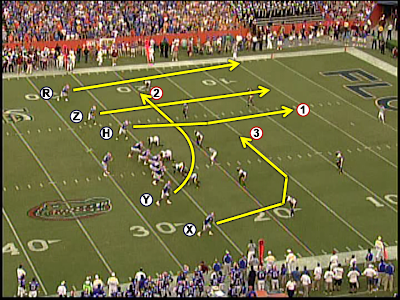 The first cut-up you will see the Troy Mike LB turn to Percy Harvin and look to play him on H Option and he ends up walling him off as he continues vertical.  This puts the Shallow and Follow route 2 on 1 vs. the Will LB lined up over Y.  The danger players that can interfere with this 2 on 1 are the CB and the FS to the boundary.  The X WR must win inside vs. Man coverage, and the Post cut at 8 yards before breaking off the Follow route at 10 yards will help him to beat the CB.  I am a a big "step" guy when it comes to coaching WRs and I have taught the Dig or Follow route as 5 steps vertical aiming at the CB's inside #, stick it hard, 2 steps at 45 degrees, and then stick it hard again coming straight across.  When ran correctly vs. loose Man, it is a very difficult route to cover.

The Post cut before breaking off the Follow route and the QB looking to H running between the safeties can help keep the Boundary FS deep, but the QB must be aware that the FS is in excellent position to rob any inside-breaking route by the X WR.  Versus teams that like to rob the X WR on any Curl or Dig route, running the Follow concept with H on the Shallow and Z on the Follow coming from the Field can be a better option.

Florida ran a different version of Folllow vs. LSU's 2007 National Championship team that featured a fierce pass rush led by All-American DT Glenn Dorsey.  Florida was worried about having enough time to throw vs. LSU, so they ran what was essentially the quick-game version of Follow where the Follow route became a deeper Shallow route.

Andrew Coverdale is on the Coaches Corner show here again talking QB Training and the "Check With Me" system at the line of scrimmage.

Getting Old!
On a side note, if you have any lower back pain, you NEED to get one of these exercise balls to sit on.  It has made all the difference in the world for me.  They can be had for only $15 and they work by helping to strengthen the muscles that help to stabilize your spine. 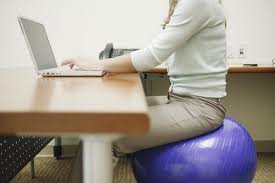