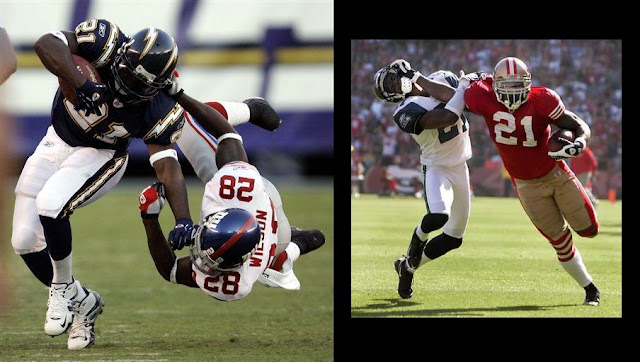 The Stiff-Arm is a violent weapon that RBs of all sizes can use to attack defenders and gain a leverage advantage.  It is similar to the Boom in the Boom Drill in that both techniques use the hand that is not carrying the football, but the Stiff-Arm is more of a long-distance weapon to keep a defender away from the body.  The Stiff-Arm Drill in the video emphasizes an upward motion with the heel of the hand, but it can be a downward punch to a defender trying to hold on, as well, as LaDainian Tomlinson illustrates above.  Hall-of-Fame RB Jim Brown describes it in this excellent article on the Stiff Arm: "If the person is not up on you, you can actually extend your arm fully and sometimes if he is coming low, you can put your hand, the stiff-arm, on top of his head."

LaDainian Tomlinson talks about how to utilize the Stiff-Arm in the same article: "Sometimes you can plant it in their face so they can't see where to grab you. And then sometimes you want to plant it in their chest, so his arms get shorter and he can't grab you." Jim Brown adds to "hit him in the face and make him blink and lose his particular balance."

In the video you will see Ricky Williams use it as a blow to the throat and Beanie Wells use it to get a defender off-balance so he could then run by him.  Most of the cut-ups show the Stiff-Arm as a blow to the face as Tomlinson and Brown described.  All in all, the Stiff-Arm is a brutally effective weapon for the RB, and it is made even more deadly when this drill is practiced periodically throughout the season.  Check it out and try it.