My friend has contributed another article:


It is a pleasure to be back on the world famous Coach Hoover blog. Today, I’m going to share another concept I learned from the Urban Meyer/Dan Mullen offense. I am not 100% sure of where it came from, but I was once told a story about this awesome play that they called “Houston.” Rumor has it that it was taken from the Minnesota Vikings with the primary purpose of beating Quarters. Ok, well that’s pretty much it for my story. I have made a few adjustments to the original concept, and overall it has been good for me. I view it as a multi-purpose zone coverage beater. It is OK against man, but not my favorite call. In this article, I will explain the Houston concept as a drop-back pass, show you how it can be effective against different coverages, and then show a few different play-action variations.

Below is the basic play out of a 3 x 1 formation. 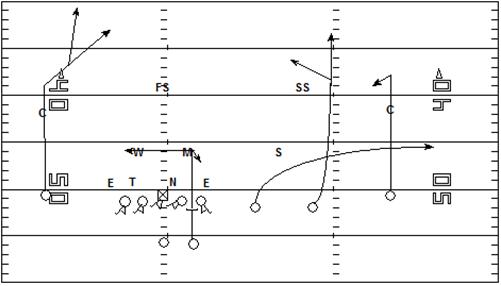 As stated before, this play is designed to beat Quarters coverage. The outside receiver to the field runs at 12-yard Curl. The number two receiver to the field runs what we call a “Bender.” He bursts up the hash (slight outside release) and reads the area in front of him. If there is no safety or he feels that he can run by the safety, he will do so. If the safety plays deep over the top of our guy, he will “bend” inside at 12 yards at a controlled speed. The number three receiver runs a Flat route and wants to expand quickly, throttle once he gets outside of the widest receiver, and finally sit out on the numbers if the ball is still in the QBs hand. The backside receiver can run an automatic route, or we can tag him. The default route we want on the backside is a 7-step Speed-Post. We think of a Speed-Post as a deep Slant, where we want to hit the receiver coming out of his break, before he gets to the hash, and at about 17 yards deep. We should only throw this route if the weak-side hash is clear. Ideally, this receiver can recognize a hash safety, and keep his route very skinny. Our Speed-Post will also convert to a Fade vs. a Clouded CB or inside-leverage man. The RB checks his protection responsibilities (basic 6-man half-slide with RB dual-reading frontside), and runs a Check-down route off the Mike, but breaks weak if covered.

Our QB is taught to look through the middle of the field to check for rotation. Houston is a strong-side concept for us, and we want to work strong-side unless we can’t. We will build in backside throws if the coverage rolls strong, otherwise, we will stay strong-side and the pattern will stretch the coverage and give us an open receiver. Based on the specific coverage looks, the QB can accelerate his decision-making process. I will now go through some situations and explain what we want to do. 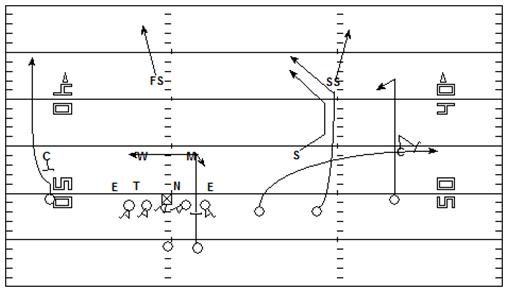 Against a 2-high look, we will work strong. QB will look through the middle and see if the Bender can win. Here, the Safety is bailing deep, but the Sam is walling off the route from underneath. This tells the QB to come down and go Flat to Curl. The CB is in a bind, and we should have an open guy. Coaching point for the Curl is to recognize the under-coverage and not run into danger (Curl player) if we are open outside. The only hope for the defense is for the Mike to fly out to the Curl, which leaves us with our Check-down. We want our RB to replace the Mike if he vacates the middle, or work to the weak-side if there is coverage on the back. 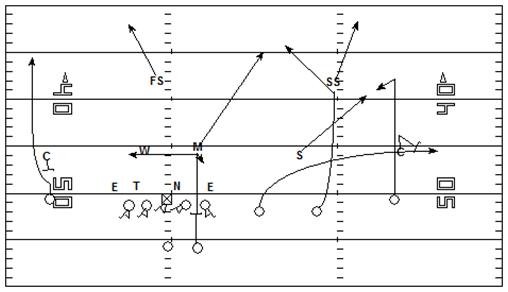 Against a 2-high look, we will work strong. QB will look through the middle and see if the Bender can win. Here, the Safety is bailing deep, but the Mike has dropped deep to take it away from underneath. From here, there are two options. The safest bet is to just go to the Check-down right away, knowing that the RB will replace the Mike, and work weak if the Will tries to match him up. The other option is to go Flat to Curl then back to the Check-down. The first option is simpler, but requires a RB that can win. The second option takes longer, but you may end up getting a nice chunk with the Curl. 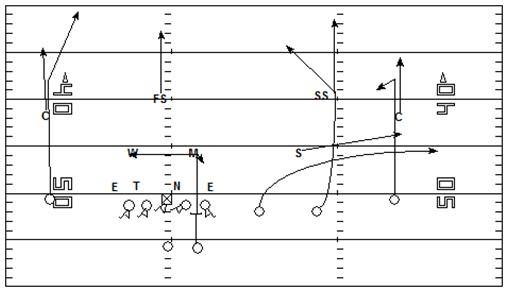 Against Quarters, a couple of things could happen, depending on how the defense plays their safeties. Here, the FS stays on the weak hash. This tells the QB that we have the advantage to the field, so we will work strong. The Bender will either run by the Safety (if Safety stays low) or bend inside if the Safety bails. Either way, the Bender is our first look. I tell the QBs that we only want this if it is obviously there because we have other routes that could be available. After the Bender, we go Flat to Curl. This really puts the Sam in a bind, and we usually get the Curl open. If the Sam covers the Flat and the Mike gets out to the Curl, we go to the Check-down.

Vs Strong-side Rotation (Cover 3, or Quarters with FS working to the Middle) 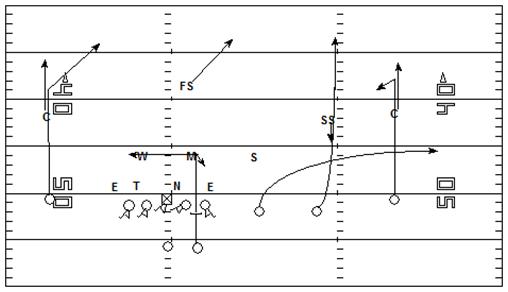 Against a strong-side rotation, our QB should hit the Speed-Post. If the Will gets underneath it, we then go Check-down to the RB. If the defense shows rotation early with possible pressure, we want to flip the protection. 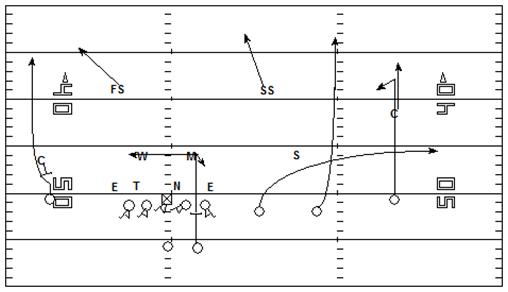 Against a weak-side rotation, we will work strong-side. QB will peek at the Bender (which will stay on the hash if it is open) and take it if it’s obviously there. After that we will go Flat to Curl off the Sam. If the Sam covers the Flat and the Mike gets out to the Curl, we go to the Check-down. 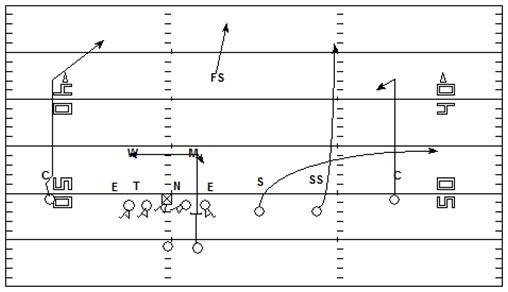 Against a Man-Free look, the QB should treat it as strong-side rotation and go weak. Our Speed-Post has to win. We could also hand-signal our single-side WR to run a different route (Comeback, Post-Corner, etc…) if we feel something would be better. 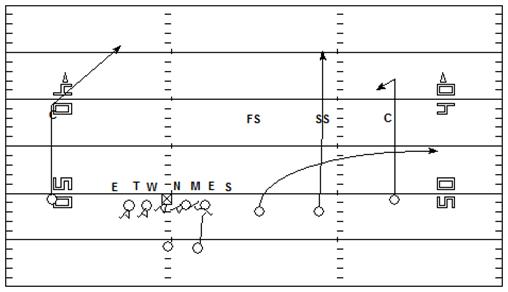 Against a Cover 0 look, we will alert our receivers that something is up. Our Speed-Post will now break at 5-steps, and the Bender will now become a locked Seam. This allows our QB to know exactly where the receivers will be in what is likely a max-blitz, get-the-ball-out-fast situation. Our QB wants to pick our best match-up and get the ball out. 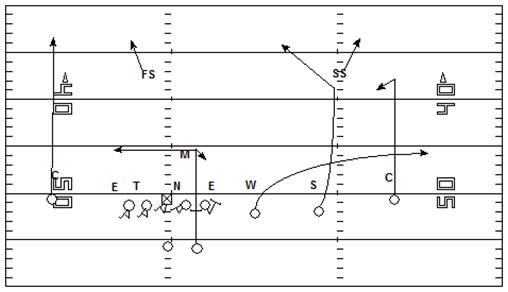 Against 2-man, we change our attack a little bit. Since we run this play out of 3 x 1 or motion to 3 x 1, it should be easy to identify the coverage. Our single-side WR will convert to a Fade, and should attract the FS with his outside-release. The Bender will have man coverage trailing him, but with wide safeties we can take a shot down the middle. If the Bender does not look good, we go to the RB who is 1-on-1 with the Mike. 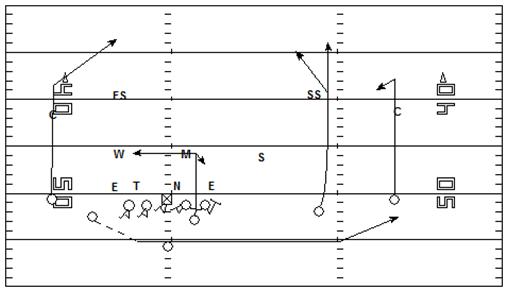 Using Jet motion is a great way to get the defense looking into the backfield. We will sell the Jet-Sweep (after the fake our Slot will run a Flare), then take a quick 2-step drop off it and throw from the pocket. Our QB will still look through the middle to see if a) the Free Safety moves with the motion, giving us the backside Speed-Post, or b) the coverage stays 2-high and the Strong Safety is flat-footed, allowing the Bender to run by him. If the deep routes are taken away, we will go Curl to Flare. The Jet-action tends to pull the OLB up to the Flare, and we will get the Curl sometimes. Most of the time, however, we will hit the backside Speed-Post. 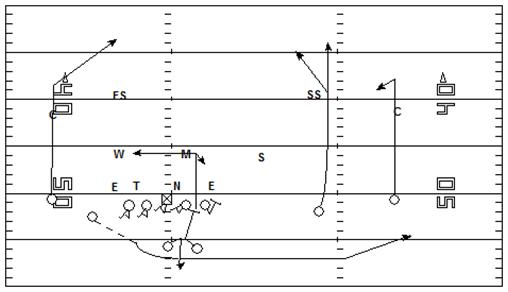 Another play-action variation is off of the zone-read with a pitch back. We bring the backside Slot in motion and it appears he is going into pitch-phase, but then continues on a Flare. The QB fakes to the RB, then takes a quick 2-step drop after the fake. The read progression is exactly the same as with the Jet-action version mentioned above.

Thank you for taking the time to read this article. My goal in this article was to show one of my favorite pass concepts, how it can be effective against different looks, and show a few play-action variations. Hopefully you have a solid understanding of the play, and can use your own creativity to adapt it to what you do in your offense if you feel it can help you. Best of luck to you next season!