Dubber just had a great post here on this subject that you need to read if you haven't already. He says, "In football terms, keeping a defense 'off rhythm' is the name of the game."  He is correct.  This post will focus solely on the Defensive End position and how to put the DE in conflict in order to keep him off-rhythm.

Urban Meyer talked about how much of what they did with their Spread offense at Florida was designed to control the DEs, because they are such tremendous athletes that they can take over a game by themselves.  These freaks of nature can really wreak havoc on an offense if allowed to get into a rhythm.  DEs that are strong and can run as fast as most RBs are a nightmare for an OT to try to block.  An Offensive Coordinator must  have plays designed to confuse and slow down the DE in order for the offense to have a chance and for his QB to survive.

Brophy said it well in this Manny Diaz Fire Zone post:  "Throughout the 90s by the way of Miami, defenses transitioned to the mantra of speed, with the defensive ends becoming the most disruptive players on the field. The more offenses game planned and tried to deal with these athletes, the more they realized they just couldn’t block those guys. This is what has brought us to the current flavor of offense, where they don’t even block the defensive ends (read game)."


The pics and video below are from a clinic done by current Florida RB Coach Brian White.  They show all of the ways to use the running game in the Spread offense to create conflict and slow the DE down.  The last slide also shows how Jet Sweep action (Bash or Flash tag) affects the LBs as well.

Creating DE conflict is not limited to the Spread offense.  Other offenses can put the DE in conflict with draw plays, outside runs that utilize a WR crack block on the DE, having the OT arc release outside the DE, Orbit sweep motion off the Inside Zone play, and Reverses.  These are all tools that offenses must use to break the rhythm of the DE and slow him down.

It is important to use the passing game to slow down the DE in the same way.  Dubber talked about using Quick Screens to keep a defense off-rhythm.  Air Raid guys like to use this play to fatigue and wear the defense down.  The cut block by the OT on the Quick Screen is a great way to frustrate and slow down the DE's aggressiveness.

The launch point of the QB must be also be varied.  This is done by using quick 3-step drops, waggles, bootlegs, and sprint-out to go along with the 5-step drop-back and play-action passing game that sets up deep in the pocket.  If all the DE sees is 5-step and play-action, he will kill the QB, plain and simple.  Protecting the QB must be the top priority in designing a passing offense.  If the QB is allowed to get hit too many times, his fundamentals will deteriorate and the passing game will suffer tremendously.

Using all of these tools will not guarantee success, but they will provide the offense its best chance for success by slowing down the DEs and keeping them from wrecking the offense and taking over the game by themselves. 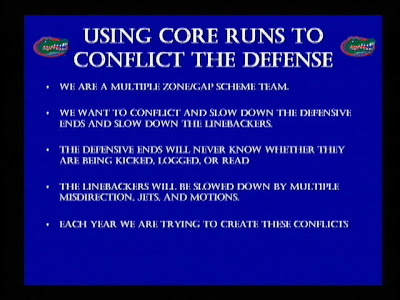 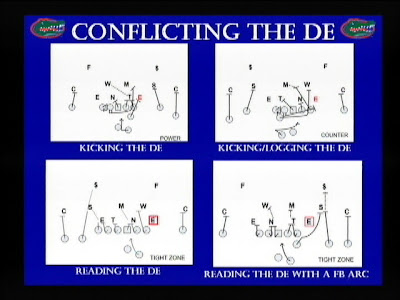 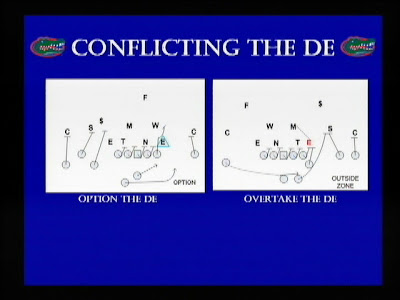 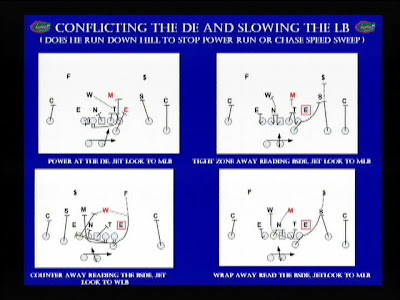 My buddy, Coach Chastain, is looking for cut-ups/info on the Oregon passing game and cut-ups on the Diamond Formation below. Contact him at coachchastain@gmailcom.