Curl-Flat is possibly the best play in football.  It is a horizontal stretch play designed to put the defensive Flat player in a bind of trying to cover both the Curl and the Flat route.  If the play is properly executed, the Flat player will be unable to do both.  Curl-Flat is a concept that has been around for quite a while and it has stood the test of time.  Its cruel effectiveness is not hindered in any way by its familiarity; rather, the design of the play makes it almost impossible for Cover 3 defenses to stop, even if they practice against it extensively.

Cover 3 remains a popular coverage, so this play continues to be a main staple in passing offenses today.  It is not the best play against Cover 2 or Man coverage, but it is not a wasted play against those coverages either.  It also has a couple of ways that it works well vs. Quarters coverage.

Let's examine the play against Cover 3.  The Curl route itself attacks a Cornerback whose primary responsibility is the deep 1/3 zone--nothing can get behind him.  The CB will usually be in "Off" or soft coverage (5+ yards) to help him to stay on top of the WR and not get beat deep.  If the Wide Receiver runs the route correctly, the CB cannot make a play on the ball.

Keys for the WR on the Curl route vs. "Off" coverage
1.  Threaten him deep.  The WR must look like he is about to run a Go route right by the CB.  A WR must have enough speed to make the CB respect the threat of the Go route so that he can get the cushion needed to catch the pass in front of him.
2.  Eyes downfield (not looking down at the ground where he is about to stop).3.  Keep your arms pumping.  Arms pumping fast help to create the illusion that you are trying to run by the CB. The arms cannot stop pumping or drop to the ground before your break, because this tells the CB, "Hey, I'm about to stop."
4.  Don't turn your head early to the QB until you drive out of your break (this is another signal to the CB that you are about to stop).
5.  A good, sharp break, coming back to the QB and to the ball under control.  It is called a Curl route, but if you literally "curl" it and run a big, lazy loop, the CB will be able to pick it off.
6.  Must have inside leverage.  If the CB is lined up inside of the WR, the WR must attack his inside # with his route to get inside leverage (position).

Some people run the Curl route as a 14 yard Post-Curl (with inside foot up): five steps vertical, then four steps (two big, two little) to the Post and break it off to the Curl.  I have run it this way before with success, but I do not believe it is the best way to run the Curl route.  It may be that WRs are turning their head too early after they make their Post cut, but I have seen more CBs make Interceptions off the Post-Curl variation than if the WR runs right at the CB.  The CB has help on the Post, so he can take a chance and jump the route, but he is on an island with the Go route, so he has to fear the vertical stem more and give it more cushion than he would like to.  The vertical stem is a nine step route (seven big, two little) with the inside foot up and comes out to a depth of 12 yards.

Flat Player
The Curl route alone will not be enough to beat Cover 3, because the Flat player can get underneath the route if he is not controlled.  The label of the "Flat" player in Cover 3 is somewhat misleading.  If the Flat player runs directly to the Flat as soon as he reads pass (which a lot of high school teams still do), the offense can severely exploit the defense.  A well-coached Cover 3 defense recognizes its primary weakness: the deep Seam area between the three deep defenders, and will coach its Flat players to help keep receivers from quickly attacking that area.  The Flat player must 1) collision and stop vertical push by any inside WR, then 2) help cover the Curl area, and finally 3) break late to the Flat area.

Modern defenses are designating the area from 0-5 yards deep as a No-Cover Zone.  Michigan State Head Coach Mark Dantonio describes this in the 2004 Nike Coach of the Year Manual: "In any zone coverage, the no-cover zone is five yards from the line of scrimmage.  If we are playing defense, we never want a player standing in the no-cover zone.  We want our defenders to be ten yards deep with the ability to break back into the no-cover zone to make the tackle."

The Problem with Curl-Flat
I believe that most teams do not run Curl-Flat as well as it could be run.  The problem is that they aren't putting the Flat player in a bind.  The play is designed to be a horizontal stretch, but teams split their outside WR out so wide that there is no horizontal stretch.  Also, some teams run the Curl route deeper than 12 yards, which affects the timing of the play.  I believe the play works best with quicker timing.  The quicker timing also keeps the Hook player from being able to get to the Curl route.  The Hook player is the "Danger" player, as he is unaccounted for in the QB's read.

We used to run the Post-Curl variation of the Curl route at 14 yards and have the WR find the window.  The problem with that was that the Hook player had time to get to the Curl and protection became an issue as the QB had to wait for the WR to work off of the Flat player and then off the Hook player to get open.  I prefer the Curl route to be shorter and the timing to be quicker to make the "Danger" player a non-factor. 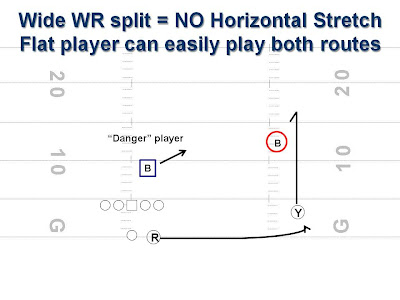 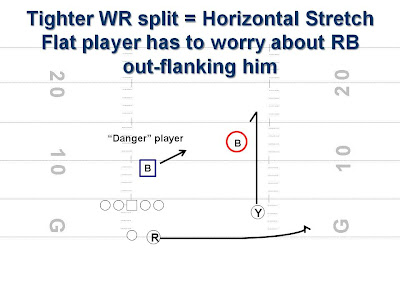 Film Room
Let's look at a cut-up of the San Francisco 49ers from the Steve Young, Jerry Rice, and Terrell Owens era (although Young is not the QB on this play).  Jerry Rice is running the Curl route and the defense rolls strong to Cover 3 to Rice's side.  It's a different Cover 3 variation in that the SS is rolling down to be the Hook player instead of the Flat player.   The ILB is normally the Hook and "Danger" player in Cover 3.  The SS is the "Danger" player here and he is already deeper and wider than an ILB located in the box would be.  Since the "Danger" player is now starting closer to the Curl route, it makes the quick timing of the concept even more crucial.

The Curl-Flat variation shown here is not as good vs. Cover 3 as if the TE were to run 5 yard Hook route over the ball between the Hook players, normally the ILBs.  The Seam route by the TE is however a good call vs. Quarters and it is better vs. Cover 2 than the Hook route.
The reason I chose this cut-up was to illustrate the bind that the tighter WR split puts on the Flat player.  The Flat player must be stretched horizontally to be put into a bind.  He can sit on the Curl route, but while the Swing route is being run, he must think that, "If I don't come off this Curl route, the RB is going to catch it and run up the sidelines for 6 points!"  If the Flat player doesn't have this fear, then the play will not be as effective.
The QB must look at the TE first, whether he has the Seam route (shown below) or the 5 yard Hook route.  This helps to hold the Hook player.  He then can read the Flat player and throw off of his movement or read it as a progression: Seam, Curl, Swing.  The QB takes a 5 step with a quick hitch up.

The Post backside is usually the way to go vs. Cover 3 strong-side rotation, but when you are a 49ers QB not named Montana or Young and it's 3rd and 10, you are more likely to try to get it to the best WR to ever play the game. 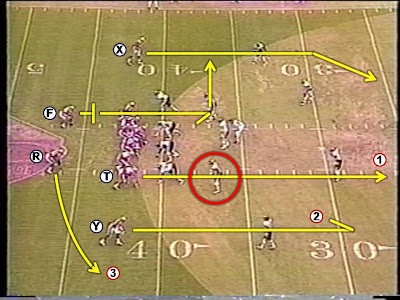 60 Y Curl from Barry Hoover on Vimeo.
Posted by Coach Hoover at 7:47 AM