I added the coverage adjustment to this post on 3/29/12.  Thanks again to the Anonymous comment that pointed this out on the video.

The Wide Cross Inside Fire Zone is a great way to get pressure right in a QB's face. The picture below is a page from Dick LeBeau's 2002 Bengal playbook:
2002 Cincinnati Bengals 3-4 Defense - Dick LeBeau.pdf 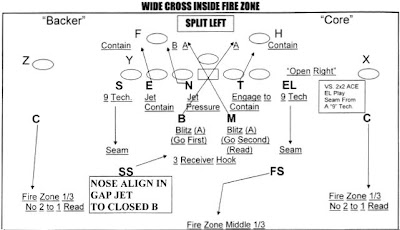 Backer and Core refers to the Force players on each side (the Sam LB and Elephant DE).  The play is drawn with the Nose in a 2i, but he is often in a Shade/1 tech in the cut-ups (just as long as he can get out of the way quick enough).  The Buck LB will go first and the Mike will go second.  Someone on Coach Huey asked about the difference between Cover 3 and Cover 3 Fire for the Corners. The difference is that the Corners don't midpoint the number one and two receivers going vertical in 3 Fire coverage as they do in regular Cover 3.
If the Corners aren't helping out vs. the #2 WRs, wouldn't this leave the FS out to dry vs. 4 Verts? Well, the key is with the Seam/Force players. Dick LeBeau teaches these players to funnel the #2 WR inside towards the FS. Blitzology explains this in more depth here and here. 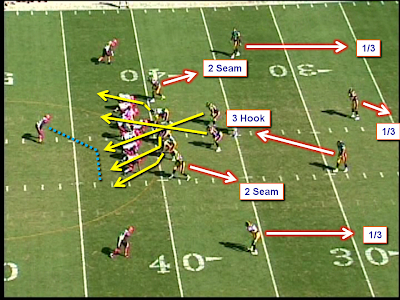 Cut-up #1 - The RB motions and becomes the new #2 so the Sam and SS switch coverage assignments to help improve their Fire Zone coverage. Also, it helps the run defense to where the SS Force player has outside leverage on #2. The Steelers will make this adjustment anytime #2 is lined up wider than a TE. 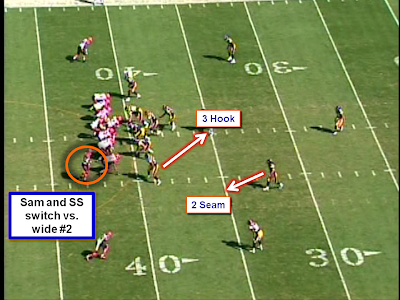 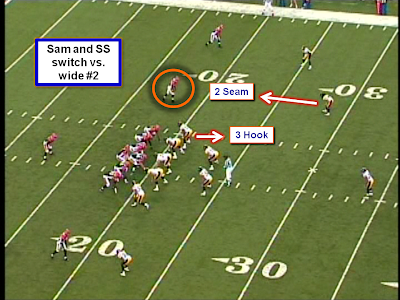 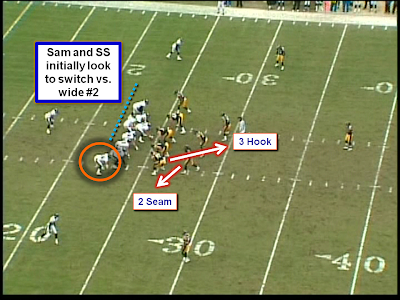 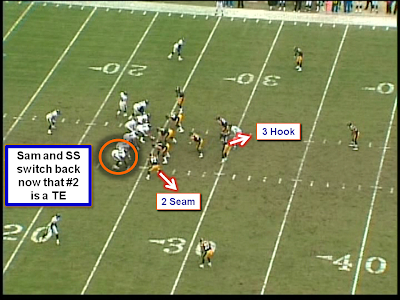 Keep an eye on the coverage adjustments as you watch the cut-ups which are from the 2004 Steelers vs. both the Pass and Run. It is a great Fire Zone vs. both.