The way I really learned the concept of "The Force" was from the book, Coaching Team Defense by Fritz Shurmur.  Matthew Brophy refers to this classic as "the bible of defense," and I would have to agree with him; it really is that good.  The principles in this book are universal to all defensive coaches, no matter what scheme they run.  Coach Shurmur was and still continues to be, thanks to his books and videos, a phenomenal teacher with the ability to explain the most crucial and fundamental concepts of defensive football in the most efficient and easy-to-understand way possible.

This is how Coach Shurmur introduces the concept of Force:

"The defense has to be designed to pressure the offense in order to squeeze or compress it.  This is best accomplished by having the defense reduce the angles by attacking the offense on their side of the line of scrimmage.  For example, in forcing the run at the perimeter it is essential that the player responsible for forcing or keeping the ball inside do his job by defeating blockers on the offensive side of the line of scrimmage as close to a 45-degree angle as possible.  This forces the ball carrier to make a decision to turn up inside quicker than he wants to and also squeezes or compresses the lane available to him to run the ball." 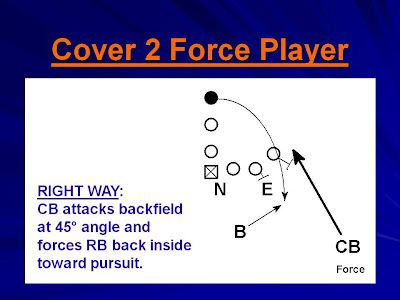 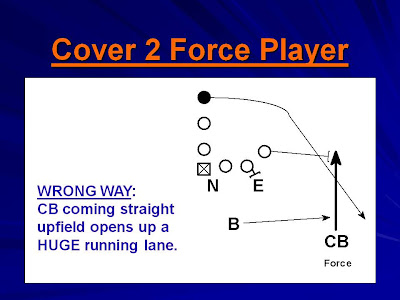 Shurmur defines the Force man as, "the defender who is responsible for tackling or making sure the ballcarrier does not get outside of him.  It is his responsibility either to tackle the ballcarrier or to force him to cut back into the pursuit pattern."

Coach Shurmur states that, "assigning specific assignments on outside runs eliminates any chance of ambiguity or doubt on the part of the player," and lists the four parts of outside run defense:

1.   Force - squeezes or compresses the lane for the ballcarrier as he forces the ball back inside to the rest of the defense.

2.  Fill or Cutback - the player responsible for tackling the ballcarrier after the Force man causes him to cut back inside.

4.  Contain - the backside defender who is responsible for any reverses or wide cutbacks.  This will be the the player, who either by alignment or stunt, ends up as the widest defender on the line of scrimmage away from the play.

Here is the video:

I will have some new videos and articles from some great guest authors on here very soon.  Stay tuned.